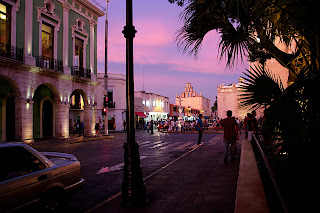 Only 8 more days and we'll be arriving in Mérida around 9 PM and then a brief ride in a taxi will find us at home on Calle 47-A.  Alan hasn't been down since May and I was last there in hot July.  We are anxious to see how the house has fared during this intense rainy season. Is the tropical foliage green and lush? Have weeds overtaken the rock covered garden areas? Hopefully, the gardener, who comes about every two weeks, has done much of the work.  What about inside? Have there been any leaks and has the paint begun peeling? The previous owners had said that yearly touch-up painting is necessary. That means we still have until February.

Has the issue with CFE (the electric company) been resolved? A more thorough explanation will be forthcoming, but let's just say that a bill was mailed to our address, in the previous owner's name, for the period from September, 2010 through June, 2011 in the amount of 35,000 pesos (at today's rate 2,582 USD). We  bought the home in February, 2011, but did not change the account to our name because they were staying until the middle of April and there was no meter. They were being billed a flat monthly rate (or so they thought), so we left the account in their name until around May 1.  A new meter was finally installed either in June or early July. It seems that CFE decided to estimate their monthly usage ( most likely based on the fact that there are seven mini-split units in the house) and back-bill for all those months. We were instructed to pay the bill within 10 days, or what? I'm assuming it means that they will stop electric service. I placed a call to the previous owner and he is filing a complaint with CFE. His final statement indicated that the account was paid in full. I instructed our property manager to pay the May-June amount, which is our responsibility, and we will wait to see what happens. Oh yes, the reason they had no meter was because the original meter was faulty and they would lose electricity for 4-5 hours every day. It took CFE over 10 months to replace the meter. I was going to save this story for another time, when the issue has been resolved, but this is as much as I know right now. I'm keeping fingers crossed that we have electricity when we arrive on 1 November.

About the feet. For the past year I have endured a fairly severe plantar fasciitis. Essentially this means that the plantar tendon is inflamed and causes pain in the heel and arch of the foot. Standing on hard floors for long periods (as I often do at work) results in my feet feeling as though I have badly bruised them by jumping on hard rocks. I hobble to my car in the parking garage wondering if I will ever be able to walk again without pain. Sitting for long periods and sleeping also result in pain on arising, which dissipates after an hour or so. When I was in Mérida in July,  I was not able to do much walking. Just going from the house over to the Paseo Montejo or to Plaza Grande was very uncomfortable.

Long story short, I finally saw a podiatrist who started me on stretching exercises, arch supports, icing the feet nightly and non-steroidal anti-inflammatory drugs. I saw him today and told him I would be in Mexico for 10 days, so we decided that an injection of steroids into each heel would be in order (it didn't hurt as much as I anticipated). Here's hoping I will be able to walk as much as I like for our entire stay.