Our Arrival in Mérida....Now What?

We drove straight from Palenque to Progreso on a Saturday. We wanted to take the dogs to a beach for some much needed exercise and for all of us to breathe some salty air after such a long journey on what seemed like endless pavement. Besides, there were guests in our Mérida home for the last night of their vacation and we couldn't exactly crash there. In the three years of being home owners in the Yucatán, we had never ventured to the Gulf shores, spending all of our precious few days in the Centro exploring our soon-to-be forever home. As we neared the shore, we veered to the East and headed toward San Benito and San Crisanto where we had browsed a few lovely beach homes on various real estate sites. There is a natural pull to the ocean or gulf waters for both of us. I grew up an easy hour's drive to the beautiful Gulf of Mexico beaches of the Florida Panhandle, and Alan a stone's throw from Long Island Sound. We lived a block from the beach in Florida for six years and then for 25 years in Virginia, a 20 minute drive to the Atlantic Ocean. We enjoy the vibrancy of urban living, but it is comforting at times to be near an ocean. I could never live in the heartland of the United States, where water is something you drink or bathe in and where you can drive all day to find a lake or stream. 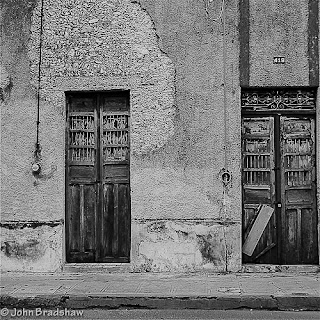 The beaches were all but deserted as we headed down the narrow paved beach road. The little sandy lanes that lead to the water's edge seemed too narrow for our monstrous van. I was afraid of getting buried to the axle in beach sand so we kept driving. Approaching the small gulf village of Telchac Puerto, we followed the signs that took us into the heart of this quaint little town. After receiving a few stares at this oddity of a vehicle, we parked on a sandy lane right on the beach in front of vacant beach houses waiting for the onslaught of next summer's inhabitants. This seemed like a quiet place, sufficiently out of the way of people who might be annoyed by the sound of a running generator. The dogs were ecstatic over an open beach on which to run and explore the smells that were somehow different from those of the Chesapeake Bay.

We walked on the beach, enjoyed the sunset and spent the night right where we parked. The next morning we explored a bit more, found a couple of the homes we had seen for sale, then headed to the Centro where Remixto had our home clean and stocked with fresh flowers, fruit, Charritos (our favorite), and sparkling water. It was so very nice to finally be home.

This blog has been all about getting here -to all the colores de Mérida and the mysterious draw of this sometimes puzzling yet comfortable city in the Yucatán, whose intractable heat either wins you over or defeats you. Maybe I'll write about our daily struggles and triumphs, or perhaps the blog will become another photographic endeavor (if I can overcome my frustration with not being able to capture the perfect image). And then, it could be time to put this away and just live...
Posted by Unknown at 12:51 PM 3 comments:

A Sweltering Day in Palenque

As we drove out of Orizaba, we again were amazed at the beauty of this part of Mexico. The plan was to head for Villahermosa, the last stop before a planned side trip to Palenque, Chiapas and the final leg of the trip to Mérida. We would drive until dusk, stop for the night, and drive down to Palenque. There is a camp site for motor homes near the ruins and we decided that we could stay overnight  if there was a vacant spot. We were getting tired from the long driving days and sensed that the dogs were about as ready as we were end the nomadic journey and settle in to a real house.  We had no clear destination for a stopping point near Villahermosa and chose to find a hotel if possible. Our stopping point ended up being a Pemex station on the outskirts of a small town whose name I cannot remember. Say what you will about sleeping in a motor home in a gas station parking lot, but I can say that it is actually very quiet and safe. Several large trucks are usually parked for part or all of the night in order for the tired drivers to take a break from the road. We asked for permission to stay and the attendant nodded his approval. It was indeed a quiet night, especially with the generator running, and sleeping in the air conditioned camper was restful. Early the next morning, after walking the dogs in a convenient grass spot next to the parking area, we began the less than two hour drive to Palenque. After driving through the small town and as we approached the national park there was an entrance road where we paid a small fee for who knows what. There were no signs, just an attendant collecting the money. We drove a bit further and found what looked like a visitor's information building. There were a number of people, mostly American or European tourists sitting at tables smoking and drinking soft drinks. There were, once again, no signs with information as to what to do or where to go to see the ruins. We spotted a palapa structure down the road and headed in that direction. There we were told that we must go back to the museum to purchase tickets. After walking back for the tickets and to the palapa hut again, we presented our tickets and were motioned to enter the trail leading to who knows where. There were a few signs along the trail explaining the various parts of the Mayan community -communal areas, living areas, etc. We took the first route which climbed to one area, then climbed to another, and on and on. It was hot and 100% humidity -not a good combination for two out of shape gringos.


We really did not know where these trails ended, only that we were getting higher and higher with no end in sight. We had hoped that at some point we would emerge to see the grand pyramids of Palenque. When we thought we could not go another level higher, we saw a couple of park employees and asked where we could see the pyramids. One of the men motioned in a direction as in "over there." We headed back down and concluded that the other trail was the one we wanted. By now we were both out of breath, soaking wet, and tired.

We continued on, however, stopping to rest with the hope that neither of us would pass out. It was so steamy my glasses were fogged over, so I removed them and carefully placed them on a nearby boulder while I attempted to take a photo. By this time we were both utterly exhausted, disappointed that we had not seen the pyramids, and though neither of us verbalized it, were ready to leave. We got almost all the way back down to the entrance and suddenly I realized that I had left my glasses on the boulder back up the mountain. Horrified, I had no choice but to turn around and will myself to make the climb once again. To make a long story short, I retrieved my glasses, made it back down, joined Alan and headed to the van. We literally peeled off our clothes and collapsed as the dogs, in air conditioned comfort, ecstatically wagged their tales at our return.

Back down off the mountain, we saw a small sign that we had not noticed before. It indicated that the pyramids were a mile or so down the road. At this point, I could not have cared less. We rested a bit, cranked the van and headed for Mérida.

Palenque...we'll see you another time.
Posted by Unknown at 1:45 PM 6 comments: