I have lots of questions about where I want to go with Los Colores de Mérida. I'm hoping that some ideas will come from the 4th Annual Latin American Bloggers Conference which is being held on November 5th in Mérida. I first discovered a Latin American blog when we began exploring the possibility of buying a place in the Yucatán and retiring there. I found blah...blah...blah...Ginger! to be an interesting and personal journey of two women and their beloved animals as they settled into their lovingly restored colonial home in the Centro. Then I found Moving to Mérida, a blog coming from a young Houston couple as they begin their dream of buying a home, renovating, and eventually moving to this wonderful city. Over the course of almost two years, I've discovered plenty of other Mexico-based writers who mostly chronicle their respective journeys from the United States and Canada to this vast country south of the border. The writing style varies, but all of them have something unique to say to their readers. With the newer blogs, including this one, the emphasis has been on chronicling the joys and pitfalls of purchasing and/or renovating a colonial home, discovering good restaurants, or simply elaborating on the successes and frustrations of dealing with Mexican bureaucracy. Some of the older blogs, like An Alaskan in Yucatán, have a beautifully written personal and reflective tone, and an occasional social commentary. Others take a light-hearted approach or provide a detailed and well photographed account of their travels throughout Mexico and the rest of the world. You will find the list of Blogs that I regularly follow on the sidebar to the right. 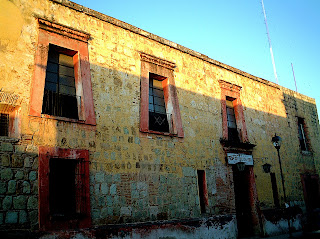 When we are finally settled in our new life and adventure in Mérida - when the proverbial polvo has settled - I can see myself blogging about a trip to Oaxaca or Palenque with beautiful photographs detailing the magnificent sites, or ranting about the crazy drivers in the Centro, or swooning over the fabulous new Lebanese restaurant. I can see myself letting go the angst of  political shenanigans back in the United States and commenting in a more detached manner, and I can imagine describing to readers the secret spot we have discovered and displaying photos of our dogs gleefully playing on a secluded sunny, sandy beach...


Perhaps I've already answered my own question.
Posted by Unknown at 10:34 AM