Belize - a bit British, a bit Mayan, & a lot Caribbean

While we are dreaming of photographing Chichen Itza, I have my eye on another site for some great photos. Since we are retiring to this corner of the world, I've gained an interest in learning more about our neighbors to the south. Belize, formerly British Honduras, is the only country in Central America where English is the official language, although only a small percentage speaks it as their first language. A small nation-state, Belize has a population of about 333,000 (2010 est.) and is the only nation in the region with a British Colonial Heritage. In fact, Queen Elizabeth is the official head of state and appoints the Governor-General. The British parliamentary system is led by the Prime Minister, who exercises executive authority. 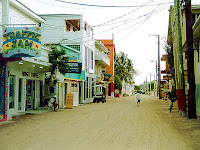 Located approximately 330 miles south of Cancún, Belize is bordered to the north by Mexico, the south and west by Guatemala, and to the east by the Caribbean Sea.  Before Europeans arrived, Belize was occupied by the Maya and there are recovered ruins as well as those still in the jungle.

Of course, there are many other incredible places to see that are in Mexico. It's hard to decide where to go first. If you haven't seen some of the videos produced by Mexico for the bicentennial celebration last year, you should take a look. They are breathtaking. I've linked to them on my blog before, but here is the video for Chiapas. I would like to, one day, post my own photos of this beautiful place. Then there's Veracruz, Sinaloa, Oaxaca....
Posted by Unknown at 10:50 AM