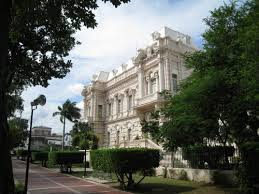 Word has it that the Paseo de Montejo is scheduled for a facelift. The Champs- Élysées of the Yucatán is soon to see a few miles of newly paved streets and other enhancements. This information comes from two reliable sources, a successful business owner a few doors down from the Remate and our über knowledgeable, reliable and Spanish teaching taxi driver, Juan Ortiz. We also noticed a building we had not seen before - a tall, sleek black stone and glass office-like structure that is a drastic departure from the typical architecture seen on the Paseo. I regret not snapping a photo, but to be honest, neither of us took our cameras out of the bag the entire time we were in Mérida. I think it is perfectly fine to incorporate a bit of modernity into an otherwise architecturally significant historical district. For example, in Norfolk, Virginia there is an attempt to make every new building look as if it has been here for 150 years -red brick, fluted columns, fake pediments. It ends up looking drab and boring and rather than complimenting the historical structures, dilutes the entire block into an uninspired landscape. The problem here, I think, is a long standing and rather staid architectural review board. Mérida must surely have a similar process to review architectural designs, particularly in the historical districts. Let's hope they exercise a restrained, yet creative vision for this lovely boulevard. 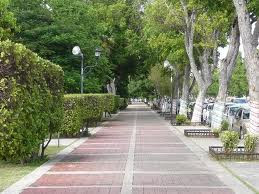 Posted by Unknown at 11:17 AM 2 comments: Links to this post

A Garage Sale in Mérida ...

We've been gradually eliminating some of the furniture we inherited (purchased) with Casa de las Lechuzas and replacing with pieces more in line with our tastes.  At times we have thought that we wanted to move to a more contemporary look after over 30 years of living in a house full of antiques and traditional furniture, but we always end up being drawn to the traditional.The previous owners of our home did an admirable job of decorating, using modern pieces and interspersing with a couple of antique painted and decorated Chinese cabinets. Their art works, which were mostly abstract or modern, did not remain with the house. About the only personal belongings we will bring to Mérida are some of our paintings. For that reason we have purchased very little art for the house. Other than a wonderful oil on canvas by a Cuban artist purchased at SoHo Galleries, there are a few inexpensive prints currently adorning our walls.

This trip we wanted to get some comfortable furniture for the studio/media room, but before having it delivered we needed to eliminate two rather large ultra-suede corner chaise lounges. Enter Yucatán Online Garage Sale, a Facebook site originated by TheYucatán Times. I took some quick photos, logged in to the site and easily posted the items for sale. Within less than an hour I was messaged by a potential buyer, who dropped by to see the furniture, paid cash on the spot and returned the next morning to pick up. I have, at various times, seen individual items and what appears to be the entire contents of a house for sale. It's quick and easy to find something you might like or to sell an item you no longer need.
Posted by Unknown at 2:27 PM 2 comments: Links to this post

This trip to Casa de La Lechuzas has been interesting and busy. A lot has been done, but new ideas about future possibilities with the house have us dreaming again. It hasn't been all work, however. We've managed to eat dinner at two new restaurants and have enjoyed Rescoldo's twice. I repeat myself when I say that I could live off their Greek salads and thick, warm, open oven-baked pita. Add a side of tzatziki and roasted red pepper hummus and I'm in heaven. The cooling effect of cucumbers, strained yogurt, mint, dill and Greek olives makes Mediterranean food perfect for this hot climate.  The ever changing gelato flavors are not to be missed -Toasted Coconut, Cranberry Almond, Dulce de Leche, or Honey Lavender. Lavender flavored gelato, you say? Delicious. Now, if we can just find a great Thai and Indian restaurant, we will be happy.

On the work side, we have accomplished a few tasks with many more remaining after we are gone and just before we arrive in September. Painting will be completed, pasta tiles polished to a spit shine and electrical issues will, hopefully, be resolved. The electrician wants to investigate further and probably redo some of the lines. It is nothing major, but annoying things like dimmers not working. The configuration of outlets is confusing and we still have to press one toggle switch after another to turn on the lights that we want. We would like to simplify the operation. It's tough getting older.

Did I mention that it has been a bit warm in Mérida this week? We have enjoyed the pool this trip much more than other times. For once, it is being maintained properly and the heat has made the water temperature comfortable. The pool is fairly large and warms up slowly but seems to cool down quickly after the sun goes down. A swim just before midnight last night was relaxing and refreshing.

We managed to meet a few new friends and neighbors as well as seeing an old friend. Our stay finally coincided with that of these two guys, both extremely nice and comfortable to be around. One is a deep Southerner like me, the other with an unmistakable accent from a land far down under and away. Then, there was a neighbor from around the corner ( a reader of this blog) who stopped by for a nice chat and with whom we hope to have many more conversations. Finally, we met a new Facebook friend with an opinion (his words).


Posted by Unknown at 3:33 PM 2 comments: Links to this post