....of only a few of the famous sites in Mexico ( Chichen Itza and Palenque to mention two) and a few of the not-so-well known, was nonetheless a bright star for the country. In addition, it has perhaps made a 'star' of President Felipe Calderón. He comes across as a fun-loving and fearless adventurer and an admirable family man. His lovely wife and three children accompany the President and CBS travel news producer Peter Greenberg on this fast paced helicopter tour of only a few of the 31 Mexican states. I found it unusual and quite nice to see the First Lady on the ground leaning over the edge of a deep cavern taking a phone photo of her husband and Greenberg descending from a rope into the depths of this vast chasm. He manages to let Greenberg go first and yells "it was nice to know you" as he stands at the precipice looking down. Behind the business-like facade of Calderón is a great sense of humour and a great sense of pride in his country. 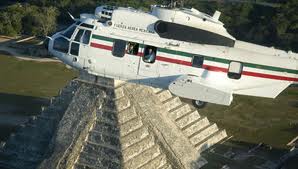 One of the highlights for me was a brief stop-over in Morelia, the President's hometown and where his Mother and other family members reside. It was funny when asked by Greenberg if Calderón was a good student as a young boy and she replied with the "so-so" hand gesture. You know where he gets his sense of humour.

About all we saw of the Yucatán was Chichen Itza. There was a scuba dive in a cenote, but I'm not sure where it was located. A boat ride down a river in Chiapas with a few Mayan guides led to a sacred spot probably few have ever seen.

It is too bad that the program could not have lasted another hour and we could have seen more of the vast and breathtaking vistas of Mexico. I imagine that PBS will show this during one of their frequent "pledge" drives, so there will be a lot of exposure.
Posted by Unknown at 6:21 PM