Our friends, Elizabeth and Anne, had been wanting us to accompany them for dinner at K’u'uK, a newer restaurant in Colonia San Ramon Norte, for months. Last week we finally made reservations for five on Tuesday night. None of us had been there before, so we printed directions from Google Maps and thought it would be easy to find. We decided to pick up Elizabeth, Anne, and Bob, who are on staying on Calle 66-A, at 6:30 for a totally unfashionable reservation time of 7:00 PM. It seems we all like to dine ahead of the crowds which usually ensures better service and has us all home at a reasonable hour.

We pulled away from their house right on time, thinking we would be early for our reservation.  At 7:30, after driving around for an hour trying to find the restaurant, Alan phoned them and asked for help with directions. It seems we were in the correct neighborhood, but as we later found out from the Chef, Google has not accurately located the exact address. We had followed dead end streets on dirt roads with no luck. The doorman remained on the phone with us as he guided us directly to their front door. Talk about service. Once inside, we were offered our choice of tables, inside or on the terrace. We chose inside for the air conditioning that seemed just right. At that hour, even 45 minutes late, we were the only patrons. We were offered a tour of the kitchen and other areas of the restaurant either before or after dinner. We chose to eat first as we were all quite hungry.

Once seated we were given two menus -the tasting menu and the a la cart menu. We were also served a special house agua infused with chamomile and apricot. The tasting menu was explained by the maître d' and we all chose the 10-course selection (they also offer a 14-course).  Each course consists of only a few bites, but after the meal we all were satisfecho. After a Sorbet macaron, we were served Chaya con huevo (Chaya with egg) on a potato film with chaya leaves and herbs from the garden. The lechuga local included edam cheese, avocado, baby potato, Yucatecan chili ashes, and herbs. There were then two fish courses, the first being tuna cured for 3 days in Celestun pink salt with grapefruit puree, mustard, and maltodextrined twice-fried pork belly. Then came Hogfish snapper with white cucumber, mango with chîa seeds and habanero chili. There were courses with Cerdo Pelón (Creole suckling pig) and rabbit with slow cooked, crunchy corn roots, garden spinach and underground cooked corn.

Each course was served with just the right interval, leaving time to have conversation and enjoy the ambiance. The final course was, of course, dessert. Three of us had the Sorbete de remolacha, beetroot sorbet with confitura de limón amarillo, tierra de cacoa, espuma de yogurt nitro y aceite de oliva. The other two were served ice cream (dulce leche) over cubed fruit and flavored purees. All delicious. Presentation is sublime at K’u'uK. Each course is served on a different and unique plate or utensil, all of which are extraordinary. When you consider that dining in this restaurant is an event and not just dinner, the price seems reasonable. It is like an evening at the Symphony or the Opera. You will be no less amazed. 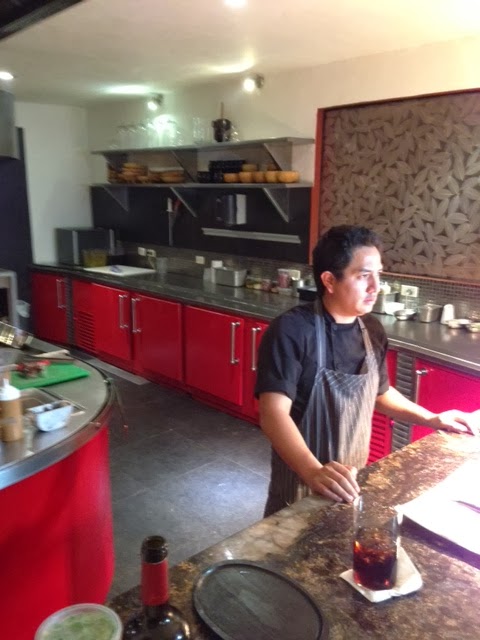 The two owners escorted us through their fabulous kitchen created with materials exclusively from Yucatán, a point which they can justifiably make with pride. They then showed us the lab where they experiment with flavors, concentrating the essences to be infused into their various sauces, creams, and even drinks. It all seemed very scientific and state of the art.

I should mention that the chef asked if we would mind being filmed during the presentation of our meal for an advertisement to be aired on local television. In appreciation Chef Pedro presented Elizabeth with an autographed copy of their incredible book explaining the concept of K’u'uK complete with beautiful photographs of their creations. This was truly an amazing dining experience and a night to remember.