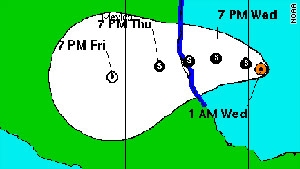 Tropical wave #4 dumped up to 88mm (almost 3.5 inches) of rain over parts of Yucatán on Monday. As usual, streets in the Centro flooded and some homes as well. As wave #4 made its way into the Gulf of Mexico it became Tropical Storm Arlene, and as it slowly gains strength could now become Hurricane Arlene as it heads toward the east coast of Mexico. According to the National Hurricane Center:
Tropical storm force winds are expected to reach the east coast of Mexico Wednesday evening, which could make outside preparations difficult or dangerous.Arlene is also expected to produce 4- to 8-inches of rain in some areas. Meteorologists say isolated rainfall amounts of 15 inches over mountainous terrain could cause life-threatening flash floods and mud slides.When Arlene makes landfall, the storm surge could raise water levels up to 2 feet above normal tide markers.


The northeastern Gulf coast of Mexico and the US Gulf coast share the misfortune of sustaining devastating damage from hurricanes. For 2011 NOOA predicts 12-18 named storms throughout the entire Atlantic basin, of which 6-10 will become hurricanes with sustained winds of 74 mph and 3-6 will be major hurricanes (category 3,4,or 5) with winds of 111 mph or greater. This does not take into account activity in the Pacific basin.


Check out this link to a collection of YouTube videos and photos of Hurricane Isadore which struck the Yucatán on September 22, 2002.


Let us all pray that these storms stay out at sea and spare both Mexico and the United States horrendous devastation.