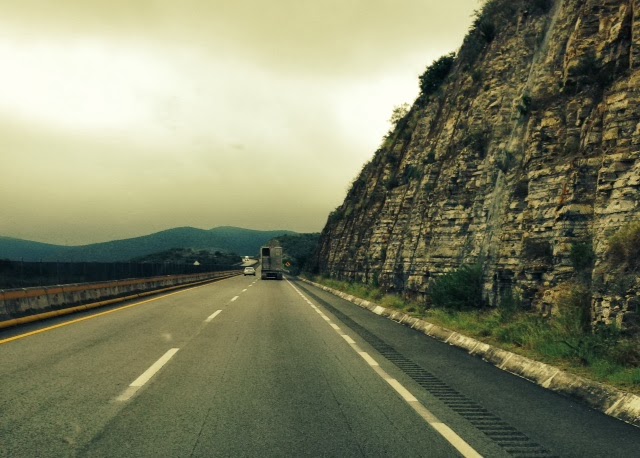 We did not know what to expect - traffic, long lines, agents rummaging through all the cabinets and drawers in our stuffed-to-over-capacity van, or worse, being told that we did not have all the necessary documents or that we couldn't cross with two dogs and a cat. I had learned through a popular RV forum that the Columbia Bridge crossing (the third of three bridges at Laredo) was best for motor homes. Some on the forum agreed and others said they did not like that particular crossing. We decided that we would go with Columbia, and after a forgettable night in Laredo, approached the border at 8:30 AM on a gray Monday. Surprisingly, there was only one other vehicle headed our way and a young lady waved us to the stopping point. Alan leashed the dogs and took them outside while she entered the van for a brief look, not bothering to check for any suspicious items we might be trying to sneak in. She then asked for the papers from the veterinarian certifying that all were properly vaccinated, gave them a cursory glance and then motioned that we could proceed. I got back in the van, looked at Alan as if to say "is that it?"and then realized that we still needed the temporary import sticker for the van.

Inside the building were windows for Migración, Aduana and Banjercito. There were no instructions for where to begin, and after glancing around as if lost, someone pointed to the Migración entrance. The agent asked for my passport and handed me two forms to complete. I completed the forms, which were suspiciously like the tourist forms you fill out when flying, and handed them to him. He studied them for a minute, then said we must return in 180 days. Oh, no, no. I took my passport and opened it to the 30-day Residente Temporal Visa, showed it to him, and then had to fill out another form. I swear it was the same form I had just given him. Now he tells me I have 30 days in which to get to Migración for the permanent visa card. Relieved, I motioned for Alan to come to the counter to complete his forms.

We then headed to Banjercito to  obtain the 10- year Temporary Vehicle Permit, which is a special permit for motor homes. It allows unlimited crossings for 10 years. After four years, however, we must obtain the Residente Permanente cards and will no longer be able to have a foreign vehicle in Mexico.
We will cross that bridge when we get there.

Immensely relieved, we climbed in the van and headed south toward Monterrey and Nuevo Laredo, that city famous for shootouts and other ghastly cartel shenanigans.