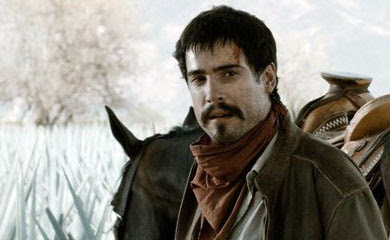 If you are in the mood for a rather good Mexican period film, Tequila: A Story of Passion is currently available through HBO On Demand. It is a beautifully filmed and sensitively acted story of a forbidden love affair between Antonio (Unax Ugalde) and Lola (Daniela Schmidt), the beautiful wife of his uncle Vicente (Salvador Sanchez). The setting is the town of Tequila, Jalisco in 1942 and a grand tequila hacienda where Vincente is engaged in business with two gringos who are invited to stay at the hacienda until the tequila is ready for tasting. While everyone is asleep, Antonio, disguised as a worker sneaks into Lola's bedroom and stays the night. We find out a bit later in the film just why she doesn't sleep in the same room as her husband. Having stayed in Lola's bedroom until dawn, the waking workers think that Antonio is a thief and attempt to thwart his escape. He flees on his horse, but with a tragic consequence. When he returns to the hacienda the following day, having been fetched by his uncle to return to work, he is confronted with unsettling news by Milogros, the daughter of a hacienda foreman.

As the lies protecting his relationship with Lola begin to unravel, the only option is for the couple to flee the hacienda and begin a new life in the city.