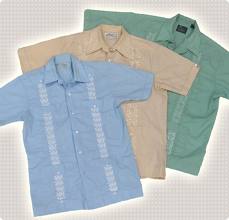 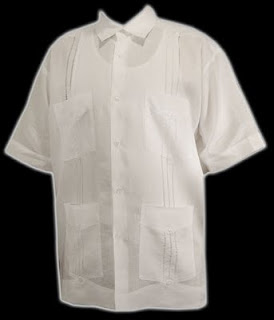 On our very first trip to Mérida we couldn't help but notice the many guayabera shops dotting the streets of the Centro. For those not familiar with the name, the guayabera  is a shirt with either two or four patch pockets and two vertical rows of fine pleats (alforzas) running along the front and back and is made of linen or cotton or a combination of either of those fibers blended with polyester. When we travel we prefer to blend in with the locals (our first trip to Europe many years ago we wore black: black shoes, black jeans, black overcoats, black luggage, black wallets). We usually purchase one piece of clothing to take back home as a reminder of the trip. When we set out to find our guayaberas, we avoided the tourist shops and instead found a small shop either near or on Paseo de Montejo. The shop owner was a tall, pleasant gentleman who spoke very good English and who was quite amused, I'm sure, as these two norteamericanos looked and tried on several shirts before making a decision. I chose an off-white linen/cotton that fit really well. Alan picked out a sky blue cotton guayabera with a simpler design that he wore out and about the following day. We passed and greeted an older lady who started speaking too fast for us to understand a word she said. After a few moments she realized we were gringos and laughed as she placed her hand on Alan's shoulder. I think she thought he was Yucatecan.  A few nights later, I slipped my shirt on and waited for our realtor to stop by. He walked in, took one look and said "new shirt? you look like a pharmacist!" I wore polos the remainder of the trip.

The history of the guayabera is murky. Some Latin Americans believe the shirt originated in the Yucatán Peninsula or was inspired by the design of similar shirts sold in Cuba. Spaniards took the design to the Philippines. The origin of the name is said to be either Mexican or Cuban. Guayabera may come from a Cuban legend that tells of a poor countryside seamstress sewing large pockets into her husband's shirts for carrying guava (guayabas) from the field, or it may have originated from the word yayabero ( the word for a person who lived near the Yayaba River in Cuba).

In Yucatán, it is known as camisa de Yucatán. Many North Americans refer to the shirt as a "Mexican Wedding Shirt. It can be quite elegant when worn to formal occasions such as weddings, or to the symphony.

Becal, Campeche in the Yucatán is home to that other fashion accessory, the Jipijappa hat, or simply 'jipi hat'. The street hawkers will call out 'Panama hats!' because that is what the tourists call them, but they are jipi's. The fiber is from the Guatemalan palm, introduced to the Mayan people of Becal by a Catholic priest in 1859. Because it is so hot and dry in Becal, the hats are woven in natural and man-made underground caves in the backyards of houses. The cool and humid caves allow the straw fibers to be malleable enough to create a tight weave and a panama hat (jipi) appreciated by hat connoisseurs from all over the world. The jipijapa can be bent, folded, twisted and crushed and will always return immediately to its original form.