I went outside last night to take a few photos of the pool.  When the camera flashed I heard a screech, but did not think much about it. Then when I took the next photo, the same screech and movement above. Then another flash, a screech and when I looked up, there they were. Two owls that appeared almost white in the dark blue sky and moonlight flew from out of the tree high above the back wall for an instant and then landed on top of the 100 year old water tower.  They were warning me to stop with the bright flashes, so I obeyed and set the camera to manual. 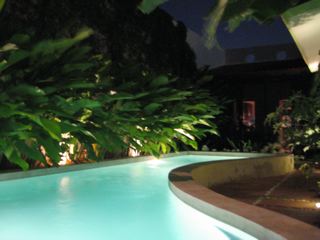 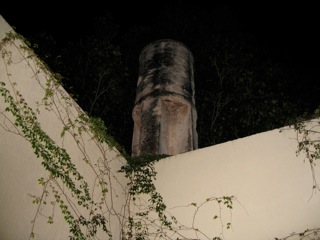 We've been told that this is one of only a few tall water towers remaining in Merida. Steve and Yuri placed a spotlight on top of the 16-foot wall to accentuate the texture. It stands right in the center of a large spreading tree and is quite striking at night.